It's a New Year, Y'ALL - Crandall is moving from creativity to comedy. In 2015, He's Cracking Up. Check It Out!

I've Moved! It's Another Year and that Means Another Blog. By clicking above you should find yourself in the location for next year's tomfoolery. I've enjoyed being creative this last year, but I'm really in a need for more laughter...

...so that's where I intend to go for the next 365 days. I want to pay more attention to the whimsical ways we know and I hope to be more comedic. I want to rekindle my sense of humor. In the meantime, here's a video montage from 2014.

Posted by Bryan Ripley Crandall at 8:00 AM No comments:

In a World Of Restless Sleep, Crandall Makes Another Attempt To Find the Perfect Pillow. I Want The Hotel Feel. I slept well at my parents. A part of this is after years of discussing with them that the mattress they took from my grandfather and moved into my room once I departed for college was hard as a rock. I'm not exaggerating. The bed was like sleeping on wood.

Last year, they replaced the bed with an incredible mattress and, I must admit, I slept wonderfully on it.

The other thing was, however, that they have one pillow on the bed that is exactly like the kind you find at a hotel. It's thick, plush, and malleable to the head. I like my pillows bulky to prop my noggin but soft enough to make me feel like I am sleeping on a cloud.

Well, I went to the store yesterday in search of one and I think I may have scored with a down pillow that, at least for now, is keeping its shape and not thinning out.

This is not the first time I've been on a hunt for the perfect headrest. In fact, I have a collection of pillows that have failed me in the past (true story: I asked Chitunga if he was in need of a new pillow and he said, "There's like 10 on my bed right now. They all work"). Yes, when I rid pillows, I've always brought them to the upstairs guest room. Well, that room is now his and he'd 19 without the mid-life sleep issues that I have.

Ah, but for me. It's about finding the right fit. I remember Alice and Charlie made a mattress/pillow purchase in their 40s and boasted to me that it was the best decision they ever made. "Bryan, if we knew we could have such comfort while sleeping, we would have made the jump years ago."

We do spent a large portion of our life in bed. Seems odd that we wouldn't invest in the best bedding we could.

The bed I have has always been okay. But the pillows. I'm forever in search of the perfect one. Fingers crossed I found it.

And it is true that I laid on the floor of the store so I could get the feel for the right one to purchase. You can't just go on the feel of the hand. You need to lay down!
Posted by Bryan Ripley Crandall at 7:30 AM No comments:

Home Sweet Home. I love my little piece of holiday: the lights, the abode, and knowing I have my own pillow tonight. 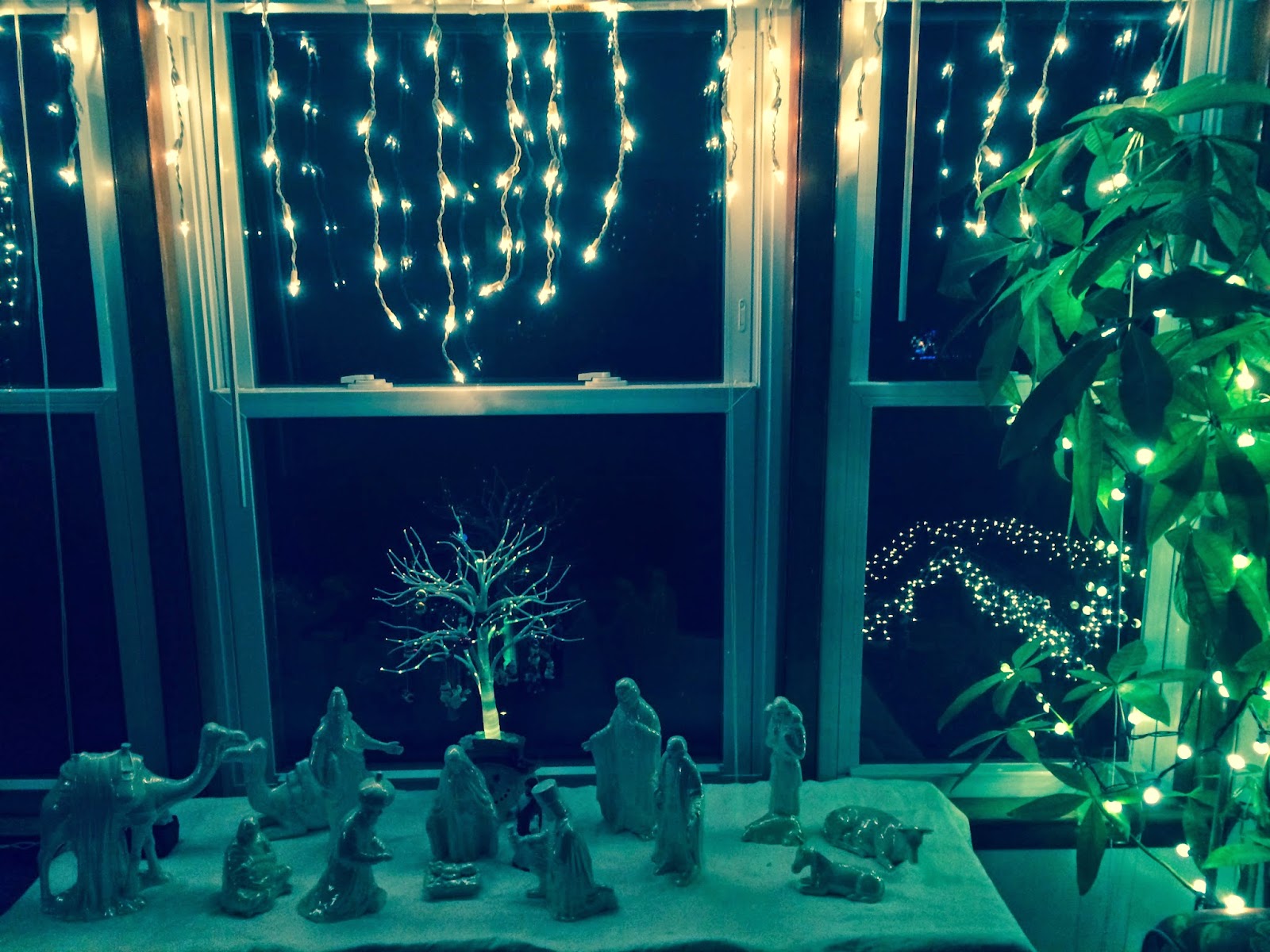 After a journey home to Connecticut, an office holiday party in Orange, a little time in the kitchen to prepare, and some unpacking, I finally settled into my living room to call it a night. It's been 7 days of celebrating and I am feeling very thankful to have the time to spend with my family in Syracuse and the safety of being in my own bed this evening.

I lit an apple pie candle and the remnants of my special cake is still wafting in the air. It smells like the holidays at 2127 Nichols Avenue and I know the time is coming to put all the decorations away for another year. This is all good. The food, the energy, the business, and the vacation can be set aside for a while. It's time to begin thinking seriously about 2015 and all that is still to come. I know January is jam-packed with obligations and I need to begin getting my head around them.

A part of me wants to keep the white lights up year-round because I find them soothing and relaxing. But, they're better appreciated when used sparingly.

I officially jumped out of my eating habits the last few days and know it's time to get back on the right track. I hope, however, the weather keeps itself as it is so I can continue my running outside in the fresh air. I'm not ready to move indoors to a gym, although I know that time is slowly creeping upon me.

Happy Tuesday. May you find yourself in your own comfort zone today.

On The Road Again and Bon Voyage! I Could Have Been a Truck Driver For I'm Happiness In-Between The Worlds I Live 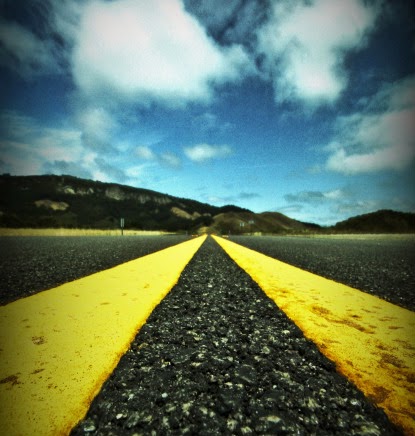 And the car is packed. We have Wegmans subs. Our technology is loaded and the wheels will head back through the Catskills on the way to the northern shores of the Long Island Sound. It's a nice 4.5 hour trek that goes faster with the co-pilot sharing part of the responsibilities (I taught the kid to drive and am confident in his abilities).

The week was successful week, indeed. Beautiful weather for running (six miles a day). Great times with family (here, there, and everywhere). And introducing Chitunga to the CNY world and how the Crandall/Isgar/Barnwells unite in excessive, foolish ways. There was time with the twins, too and at least one evening with Abdi. I can never cover all my bases, but I do what I can do in the short time I have.

But no snow. A no-show this year

I do have, however, new soup bowls and casserole dishes to bake with. Also have a new watch, socks and running pants.

Yet, most important, I have the memories of the last 7 days to reflect upon during the upcoming year. This holiday ritual is one that I love absolutely and absolutely love.

"Home is whenever I'm with you," is the wall lettering I put in my mother's stocking this year.
This is exactly how I feel when we're all together and united exactly was we all were this past week.

Posted by Bryan Ripley Crandall at 7:00 AM No comments:

The Pool Shark Analogy, Gaming Life While Living It, And Trying To Carpe' Diem While I Can. Wusah! 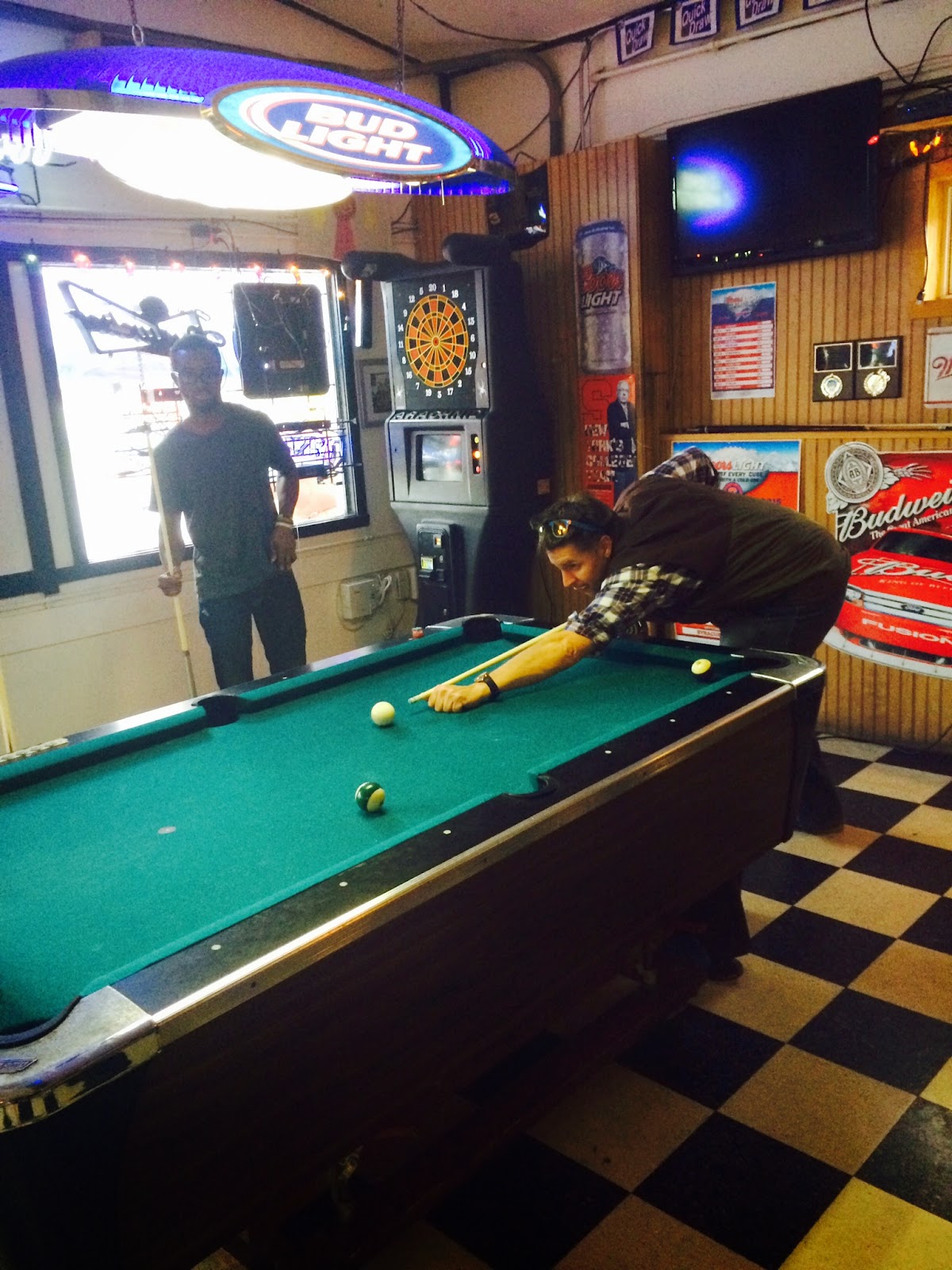 I gave myself 7 days without work. That is, besides running the daily blog, I told myself I would not stress over emails, texts, conference proposals, grants, programs, book chapters, reviews, and courses. Rather, I would give myself a little time to play. I have to say that I did better on table than the Cards did at YUM arena.

Dem Cats. They is Strong (sort of like the class of 2007 who reunited last night in Louisville and sent me photos from the bar - boy, 7 years already).

I forgot how much I like to shoot pool: to focus on a simple target and to strategically get the right ball in the right pocket at the right time. I realized, however, that the game is actually how I live my everyday, but there are more than one table at once and while I'm trying to hit my target, others are throwing billiard balls at my head.

And my final thought for today: THE INTERVIEW is the biggest hype ever - seriously? This is what upset North Korea. The film was beyond campy and dumb. TEAM AMERICA was much worse. I can't help but think illuminati on this one - that SONY staged all this to distract the gossip around their leaked emails and to bring attention to a more fabricated issue. The film was terrible.

But for today, Sunday, the focus in on Cynderballz. She is official 45 years old!  Happy Birthday, Cynde. One more chaotic event at your house and then you can put all your decorations away and nuzzle into 2015. We love you!


Posted by Bryan Ripley Crandall at 10:27 AM No comments: If you look hard enough you can see the city of Syracuse in the far distance. This was the return portion of our Saturday walk at Onondaga Lake park, one day after the holiday festivities and on a rare, blue-sky kind of day where jackets were optional. I wish the sky cleared up like this before I went for my morning run.

Still, it was great catching up with Rhiannon and stretching our legs together. I needed a break, because my brain was obsessing over losing to Dylan at Risk last night. I also was looking forward to seeing Abdi for dinner and my mother's new recipe of broccoli, chicken and curry casserole.

I'd have to say that today was another success. Chitunga got a pair of Carolina boots and I got new laces for my own.

Today, of course, is rivalry day. Time for the match up of the year: Kentucky vs. Louisville (a post-Christmas, New Year's tradition).

If you looked at the sky today you'd say it was all leaning towards Big Blue. Still, I wore a red and black flannel to counter the blue. Only time will tell.

Viva La Syracuse.
Posted by Bryan Ripley Crandall at 7:30 AM No comments:

In Love, War, Careers, Friendships, and Life, It's Always About The Risks and the Way We Play the Game. 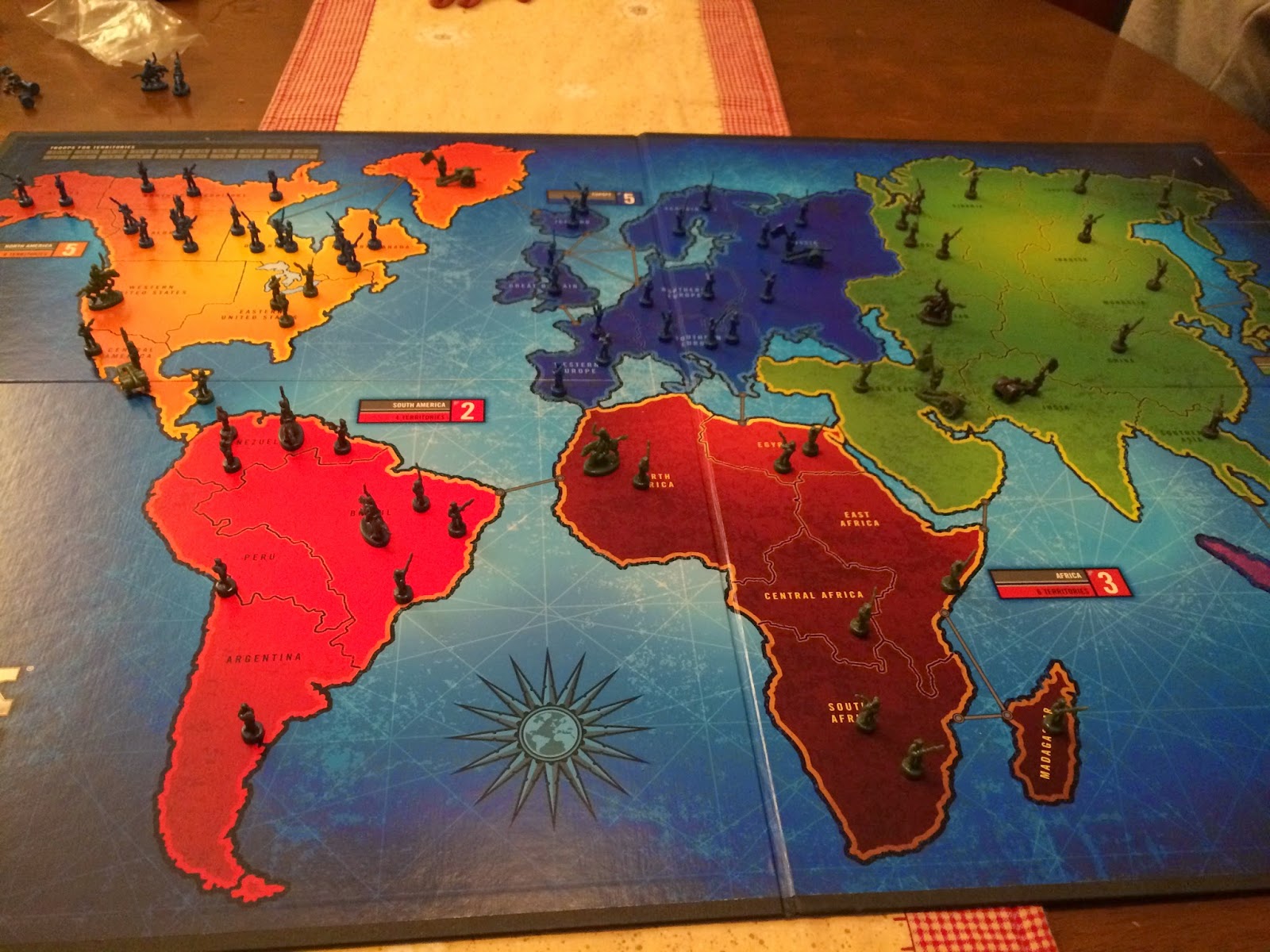 As a kid, I hated losing.

As an adult, I hate losing even more.

That is why last night's battle with Chitunga and Dylan stung me so much. I don't mind building armies and protecting territories, but I hate being on the defensive.

This, of course, is exactly what was begun because Sauron aka Darth Vader aka Voldermort aka Hitler aka Stalin aka Dylan decided to take over the world in one evil plot after another. And the #$@#$#@ was successful.

Chitunga and I did what we could to join forces and at one point thought we could stop his axis of evil, but in the end the dice were on his side and he out-rolled us. War, which is a risk, is also a battle of luck and luck was on the emperor of Doom's side.

This, of course, reminded me of all the games of Risk we used to play as pre-teens: days of wiffleball, kickball, WWF wrestling, Hide and Go Seek, swimming, Sardines, and football on Bam Hollow, Amalfi, and Duncowing Drive.

These games, of course, seems like they were played only yesterday, but a good 30 years have passed. Even so, I feel the same burst of adrenaline burning through my blood when see another winning a game over me. I hate it. It's my totalitarian nature that I try to hide at all costs!

And it was Christmas....nothing like a holy holiday to remind me of how unholy I actually am (well, Dylan...the monster destroyer of humanity and nations).

At least we have Friday today to recover. I hate to tell him, but I'm working with my own storm troopers being manufactured on the side so I can come back and kick him off the planet. 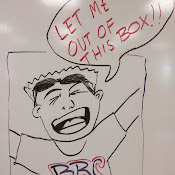